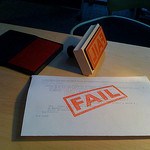 Despite admonishments to “fail early, often, and well,” we would much rather avoid failure altogether. We fear failure. Practical philosopher Peter Koestenbaum says that we see failure as a form of mini-death. No wonder we have elaborate defenses to avoid it.

Yet fear of failure limits our success. We don’t leap. We don’t commit. We pull our punches. We run too quickly for the exits when things start to go wrong. And we can shut down innovation, creativity, and caring by penalizing failures.

Instead of seeing failures as mini-deaths to be avoided (“failure is not an option”), and instead of forcing yourself to enjoy failing (“fail early and often), try a fail-so-we-can-win perspective.

PS: Come fail away with me.