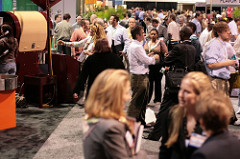 Many of us cringe when we hear the word, “networking.” We think of slimy people gathered to be slimy. We think of levels of (usually imagined) social rejection that rival a middle school dance. Or we imagine getting trapped in a fruitless exchange by some desperate soul. Despite the supposed benefits of networking, we strongly feel we’d rather not.

But there is something better. Instead of fleeing, we can insist upon an honest, natural way of networking.

Natural networking means being our kind selves, inviting others into a conversation, taking interest in others’ work- and home lives, sharing something of our own, offering to explore a topic more deeply (now or at a later date) should both parties sense the possibility of a win-win project or partnership, and gracefully moving on.

With natural networking, we get the benefits without the “Ew!”