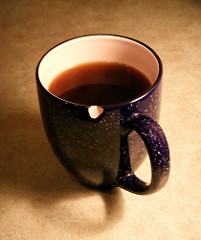 There was once a band of smart, dedicated, caring, and simply successful people. Some of them lived in Toronto. The rest were scattered around the globe. Though they didn’t really know each other, each one had guessed that they shared something in common with the others.

Take for instance Kimberly. Every morning, she would sit with her warm beverage of choice, read a little something useful that appeared in her inbox, and think how she might apply that something to her work that day. She would sip from the same chipped but well-loved mug and wonder if the others in the band weren’t doing the exact same thing.

One morning, having just finished her beverage, Kimberly was not surprised to see her colleague Prithviraj coming to her desk. They spent the better part of the last year trying to sign an important new client, AmantiCor. The AmantiCor project would be a huge win for their little company. Prithviraj and Kimberly had been more than intimidated by their bigger, more established competition, BBG Partners. “They are going to eat our lunch,” Prithviraj kept saying. “And our dinner,” Kimberley would respond.

“Just did. You thinking what I’m thinking?”

“Yup. Let’s toss the whole AmantiCor presentation and start again. We don’t need all the consultant-speak and tables. Let BBG confuse them and bore them silly. We’ll keep it real.”

Of course, they were right. The new presentation worked. AmantiCor agreed and signed on that afternoon.

Later, as she was packing up to go home, Kimberly wondered if others in the band had changed their approach to an important leading, influencing, or selling opportunity that day. She would have been shocked to hear how many had and how effective they all were.

Need to lead, sell, or influence something important? You can lay out your logic, flood them with everything you know, and make your case. None of which they will remember or care to act upon.

Or you can tell a story.